PUBLISHED BY
the Church of Scientology
since 1968

Alex Gibney and HBO have made the irresponsible and uninformed decision to provide to Sara Goldberg a prominent role in HBO’s film “Going Clear” on the Church of Scientology even though she personally was once the subject of an FBI investigation.

Had HBO or Mr. Gibney been interested in knowing the truth they would have at a minimum asked the Church to comment on Sara Goldberg’s allegations, or researched her credibility. Short of her bragging to others about her “secret” role, the Church would not have known (and could have never guessed) she was a source in HBO’s film.

Once again, this proves HBO & Gibney either ignore the extreme bias of their sources, never challenge them or accept everything they say at face value. It’s dishonest.

HBO also failed to see that each and every one of the “sources” used are interconnected. So instead of having eight points of view as HBO represented in public statements on the film, there is a single point of view told by a group of people who got together and decided to lie as one. 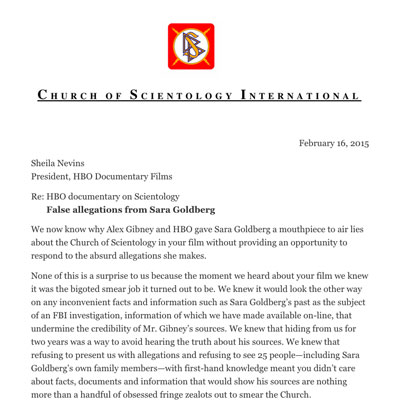 Sara Goldberg is the mother of Nick Lister, an anti-Scientologist expelled from the Church while his sister (Goldberg’s daughter) remained a devout member. Nick Lister employed Mike Rinder until Rinder began calling the executives of Lister’s company “faggots.” (Rinder is the same person HBO flew to Sundance and put up there so he could help promote Gibney’s film.) Rinder was then “let go” but not before Lister and his partner Matt Argall used their profits to finance Mike Rinder’s and Marty Rathbun’s “independent” cult, which included some wild idea that Rathbun would “take over” as head of the Church of Scientology.

The Church did expel Lister and Argall, as would any church. Attempting to take over a church is bizarre in any religion and would be considered lunacy in any age. Yes, Judas betrayed his religion—but he didn’t try to take over the congregation.

The problems between Goldberg and her son go far deeper. Since his conspiracy was exposed and he was expelled from the Church, he was arrested for DUI and drug possession and therein lies the real trauma Sara Goldberg has suffered. But for her to blame the Church over the fact that she supports her son who befriends and financially supports disgraced apostates over her daughter—a person of high moral standing—is obscene. All of this family tension and controversy was caused by Rinder and Rathbun, not the Church. They are the ones who conned Lister into backing their conspiracy. They are the ones who drove a wedge between the family and the Church and between the family itself. 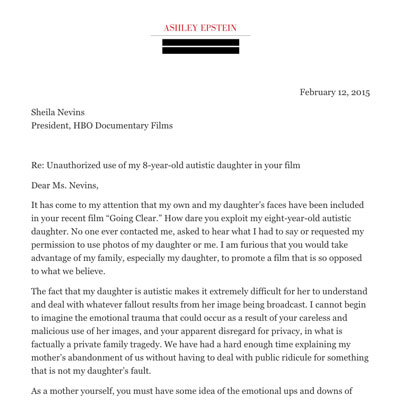 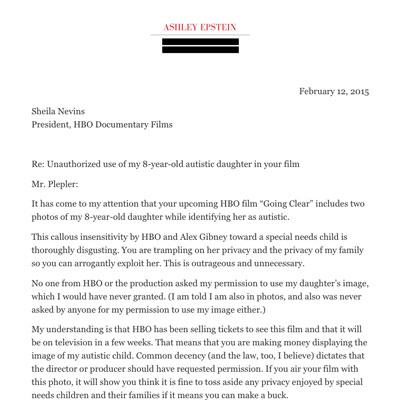 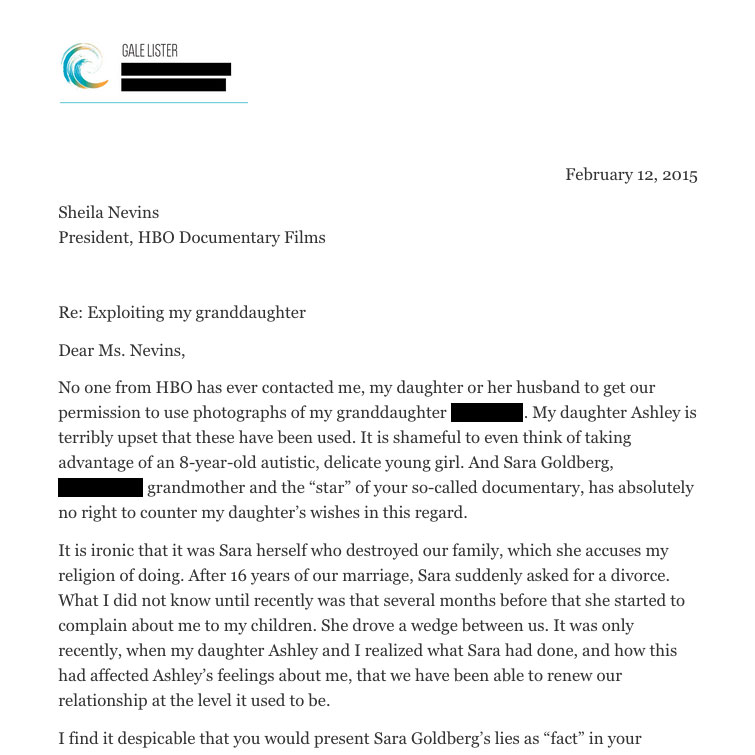 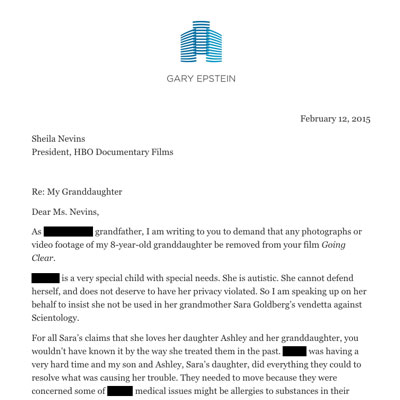 Goldberg is not some “random” expelled Scientologist that Alex Gibney just “happened to find.” Again, Gibney was steered to her by the same “sources” that Wright used in his book. He cherry-picked the most discreditable lunatics expelled from the Church over the past 30 years and then presents them—à la Goebbels propaganda—as “representative” of the religion and its members— all while ignoring every actual member of the religion and the manifest reality of what the Church of Scientology actually is.

It’s clear: By holding Sara Goldberg up as an individual of virtue HBO is spreading bigoted hate about the Scientology religion. And it is because HBO and Gibney are in bed with people who desired to take over the Church. They failed. They are despised by real Scientologists. Because they are bitter over their removal and because they are despised by members of the religion, they now attack and harass Scientologists— even their ex-wife, brother and children (Rinder). And because of those facts, they make perfect sources for a propaganda film.

But it doesn’t end there. Sara Goldberg has her own secret she didn’t tell HBO or Gibney. She, too, like Wright’s other apostate sources, has committed criminal acts.

In fact, more than three decades ago, Sara Goldberg was at the center of a federal criminal investigation into her efforts to steal Justice Department documents about the Church.

What makes Goldberg’s inclusion even more outrageous is that Gibney’s two primary sources, Marty Rathbun and Mike Rinder, fully know her background and the baggage she carries as a tainted source for the film. Yet their chronic dishonesty, obsession with seeking revenge for having been kicked out of the Church, and money motivation, all dictate that they orchestrate her appearance in HBO’s film anyway. We have no doubt that they, and Goldberg, never volunteered any of these facts because they knew the information would get in the way of their hidden agenda.

HBO cannot rely on Sara Goldberg as credible, at all. She lied to the Federal Bureau of Investigation about illegally infiltrating government offices in 1979 to access records about the Church at the behest of her superiors with the former Guardian’s Office. This rogue, autonomous group was purged from the Church more than thirty years ago.

The FBI investigation discovered Goldberg’s fingerprints on Department of Justice files she was not authorized to access. At the time, Goldberg was working as a secretary for a Justice Department attorney. In an FBI interview on March 29, 1979, Goldberg lied about her religious affiliation, claiming she was Catholic instead, and also denied taking the job to gain information for the then-Guardian’s Office. But, according to government documents, when questioned further by the FBI, Goldberg lied a second time saying, “she had joined the Church in 1976 but had ceased her membership with the Church upon hearing about several of the Church members being indicted by a United States Grand Jury.” Both statements are lies. Goldberg has admitted to her lies and criminal conduct in a handwritten statement.

Goldberg has tried to deflect attention from her past criminal activities with self-serving crocodile tears—just as she did when caught by the FBI—which we have no doubt she provides on cue for Mr. Gibney.

It is appalling that 36 years after lying to the FBI she is being put on a pedestal by HBO when records fully accessible to Gibney show she narrowly avoided government prosecution and what likely would have been a prison sentence, by agreeing to leave her government job immediately. (See document on the criminal investigation of Sara Goldberg a/k/a Sara Ann Wright , released by the Department of Justice.)

It is a matter of historical record that Mr. David Miscavige, long before he was the ecclesiastical leader of the Scientology religion, conducted the investigation that unearthed the conduct this rogue department had attempted so hard to hide. He saw to full cooperation with law enforcement and the removal from Church staff of any person involved in conduct that violated the law—never again to be staff members for the Church. This was a heroic achievement that protected the religion and was widely recognized as a major turning point in the Church’s history.

To this day, parishioners consider his dismantling of the Guardian’s Office as a critical action that did nothing less than save the religion. Mr. Miscavige has always kept the ranks clean. In fact, the failure by Alex Gibney’s sources, notably Marty Rathbun and Mike Rinder, to abide by Church ethical standards, is exactly what led to their removals. It also is at the root of why years after being expelled, they continue to denigrate the Church and its leadership to people like Alex Gibney.

The former Guardian’s Office past activities, along with proactive actions taken by the new Church leadership to clean it out, were fully disclosed to the IRS in what was the most thorough review for any exempt organization ever. As a result, the IRS found the Church was organized and operated exclusively for charitable and religious purposes and “was not engaged in illegal activities or otherwise in violation of any fundamental public policy….”

Mr. Miscavige’s role was formally brought to the attention of the Honorable Mr. Justice J.B.S. Southey of the Ontario, Canada, Court of Justice, and in a decision of September 11, 1992, Justice Southey acknowledged the ecclesiastical leader’s role in the removal of the Guardian’s Office staff:

“The most senior person today in the hierarchy of the Church of Scientology is David Miscavige, Chairman of the Board of the Religious Technology Center. He gave evidence at trial regarding the steps taken in 1981 … to curb the work of the Guardian Office because of its unlawful acts. As I mentioned, it was decided in 1983 to disband the Guardian Office.”

Mr. Miscavige’s actions in proactively removing this cancer that put the Church at risk has been well chronicled, including by the St. Petersburg (now Tampa Bay) Times in an October 25, 1998, profile.

Yet Alex Gibney’s twisted moral compass has him again supporting someone with criminal conduct. It took honest people to clean up the mess caused by Goldberg and her co-conspirators in the Guardian’s Office. It is unconscionable that HBO would glorify such a reprehensible person. Moreover, Alex Gibney’s intended gotcha—giving no allegations so the Church can respond, saying the movie is based on the book while including in the movie sources not in the book—demonstrates conclusively his complicity in covering up the criminal misconduct of the “sources” that comprise his film. 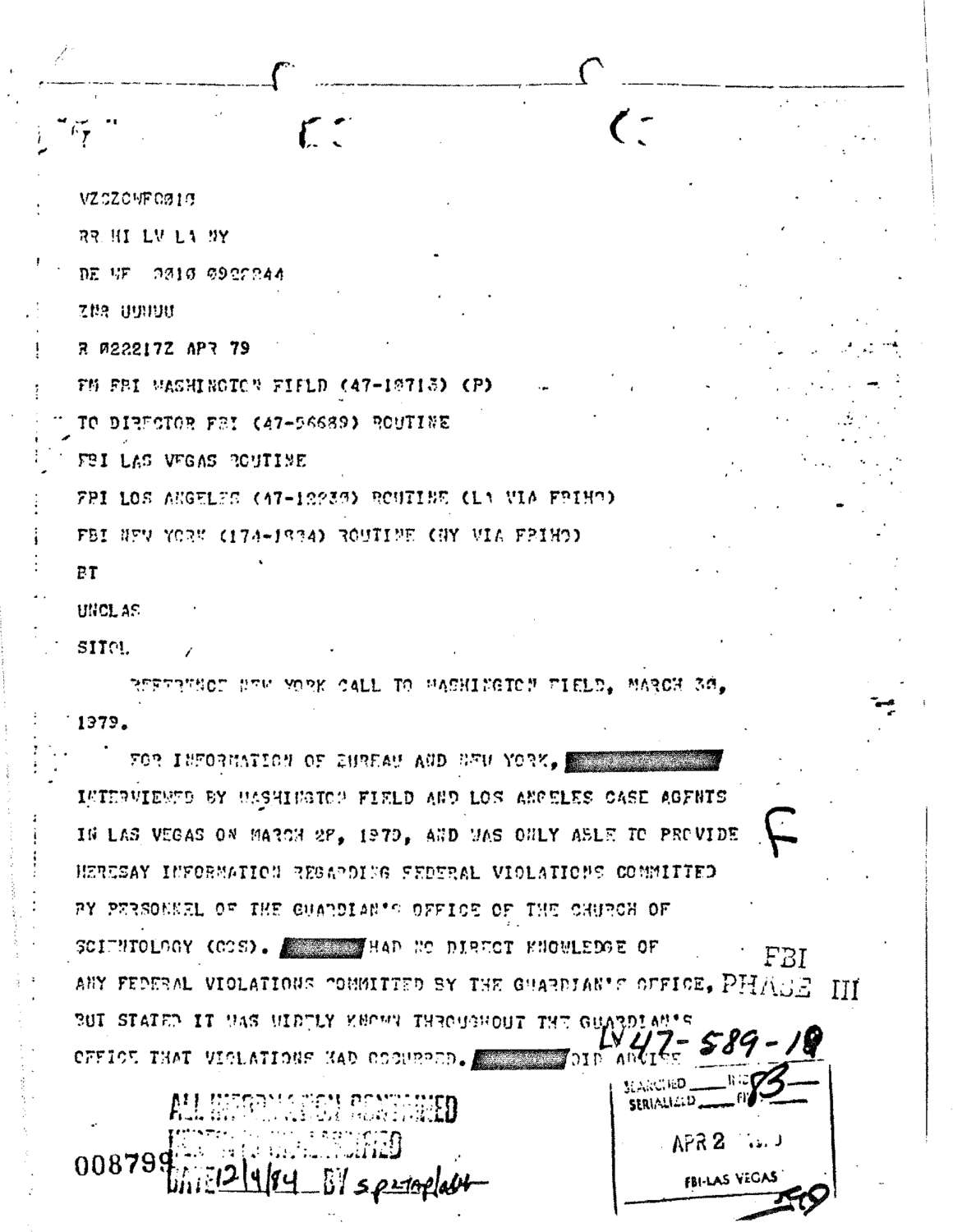 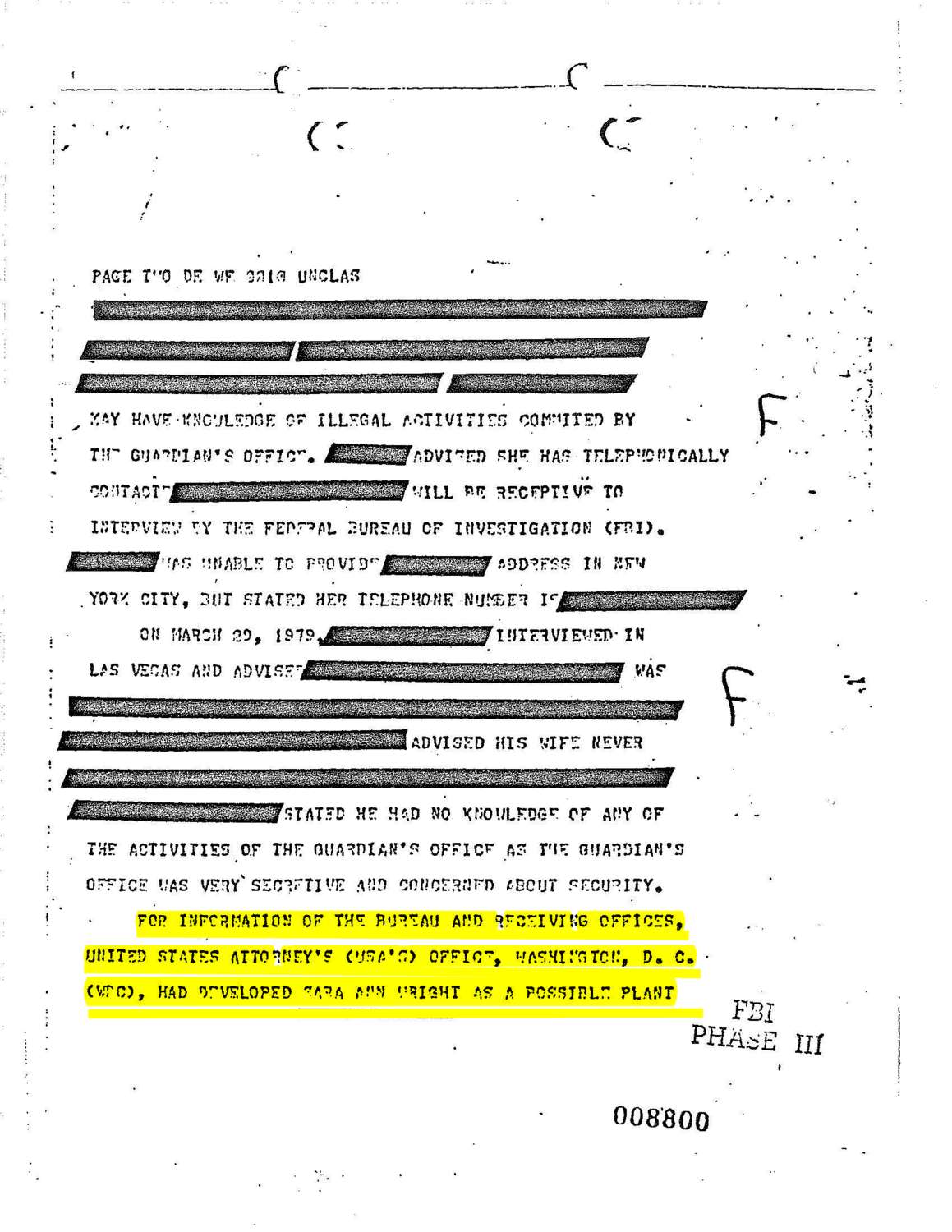 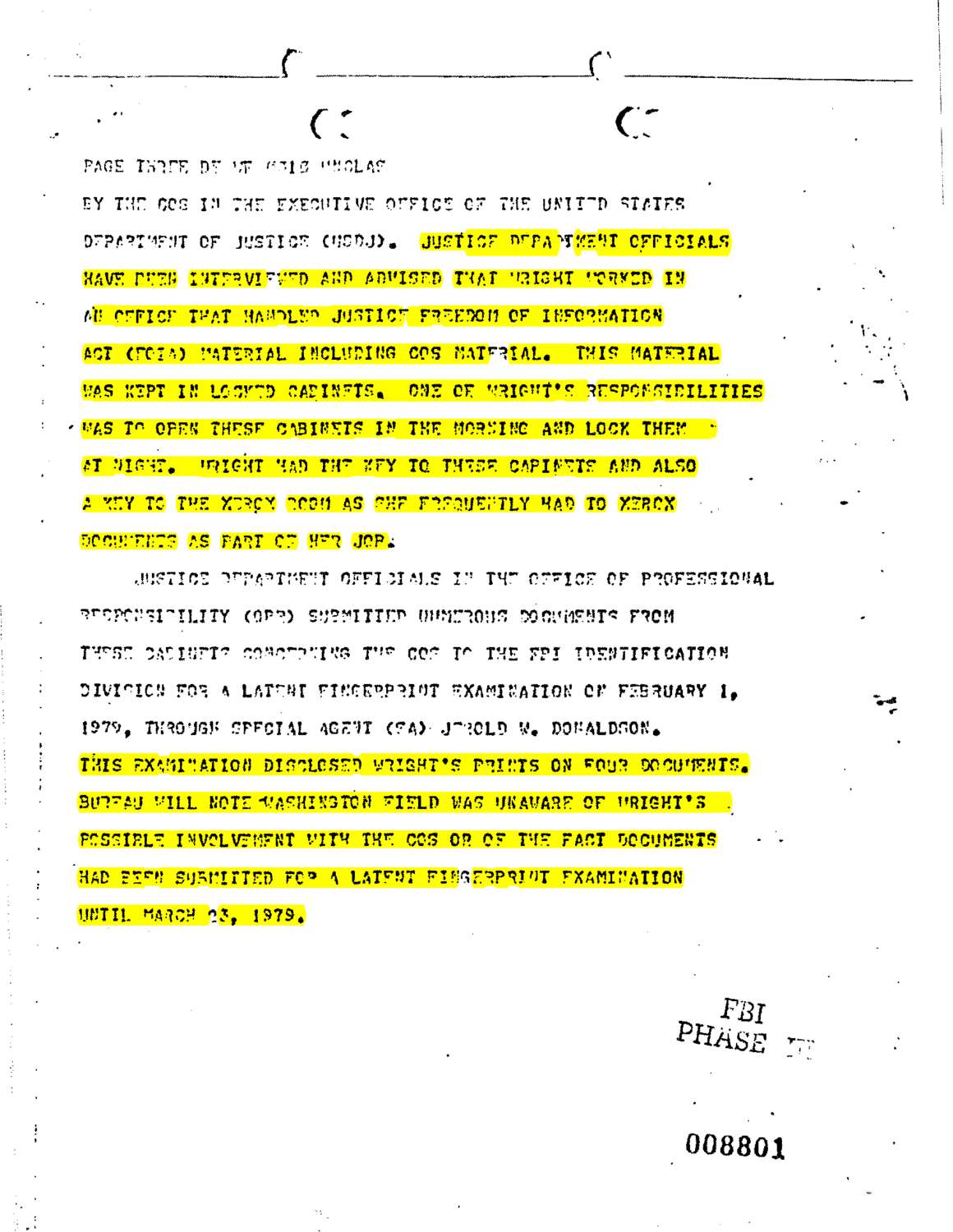 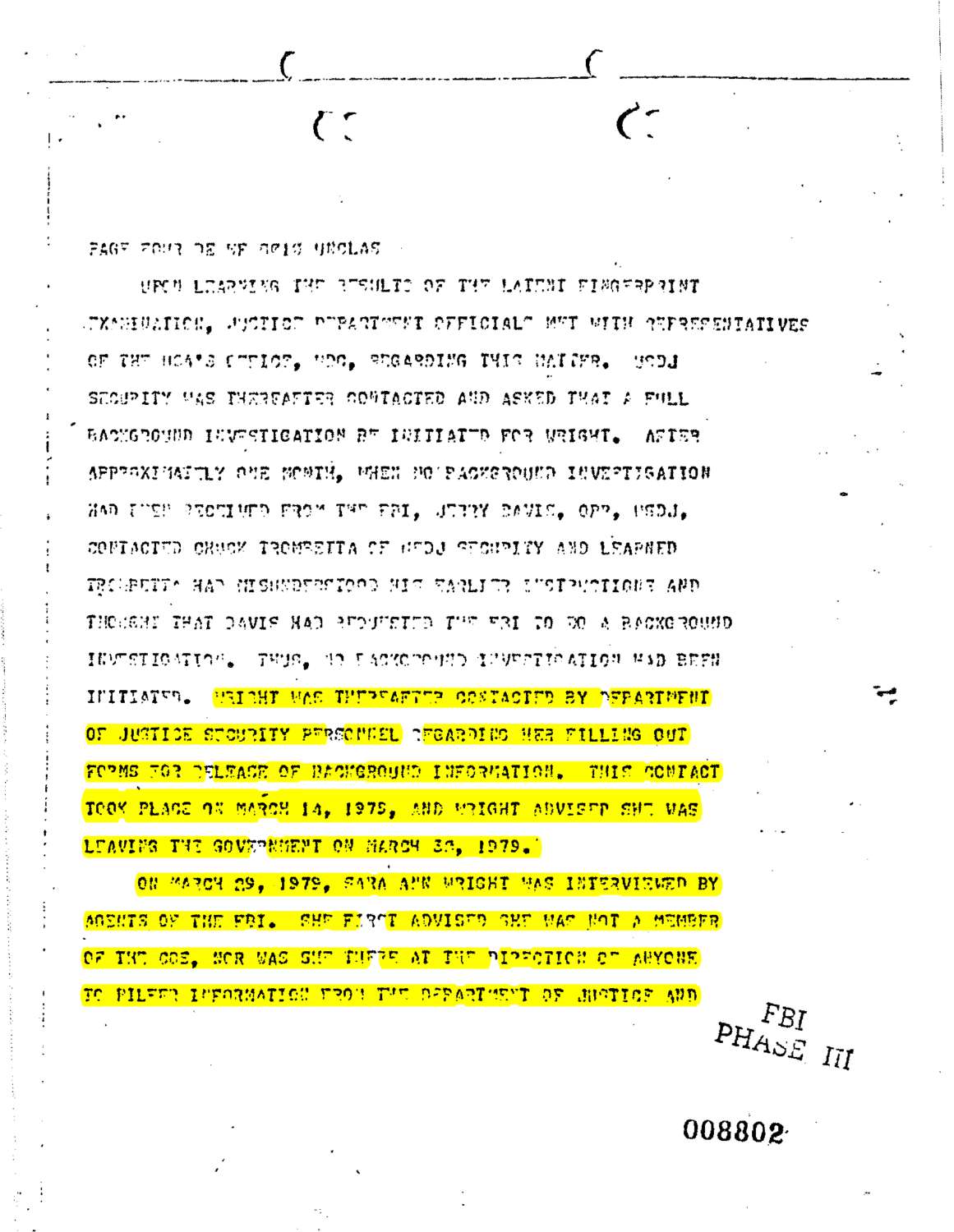 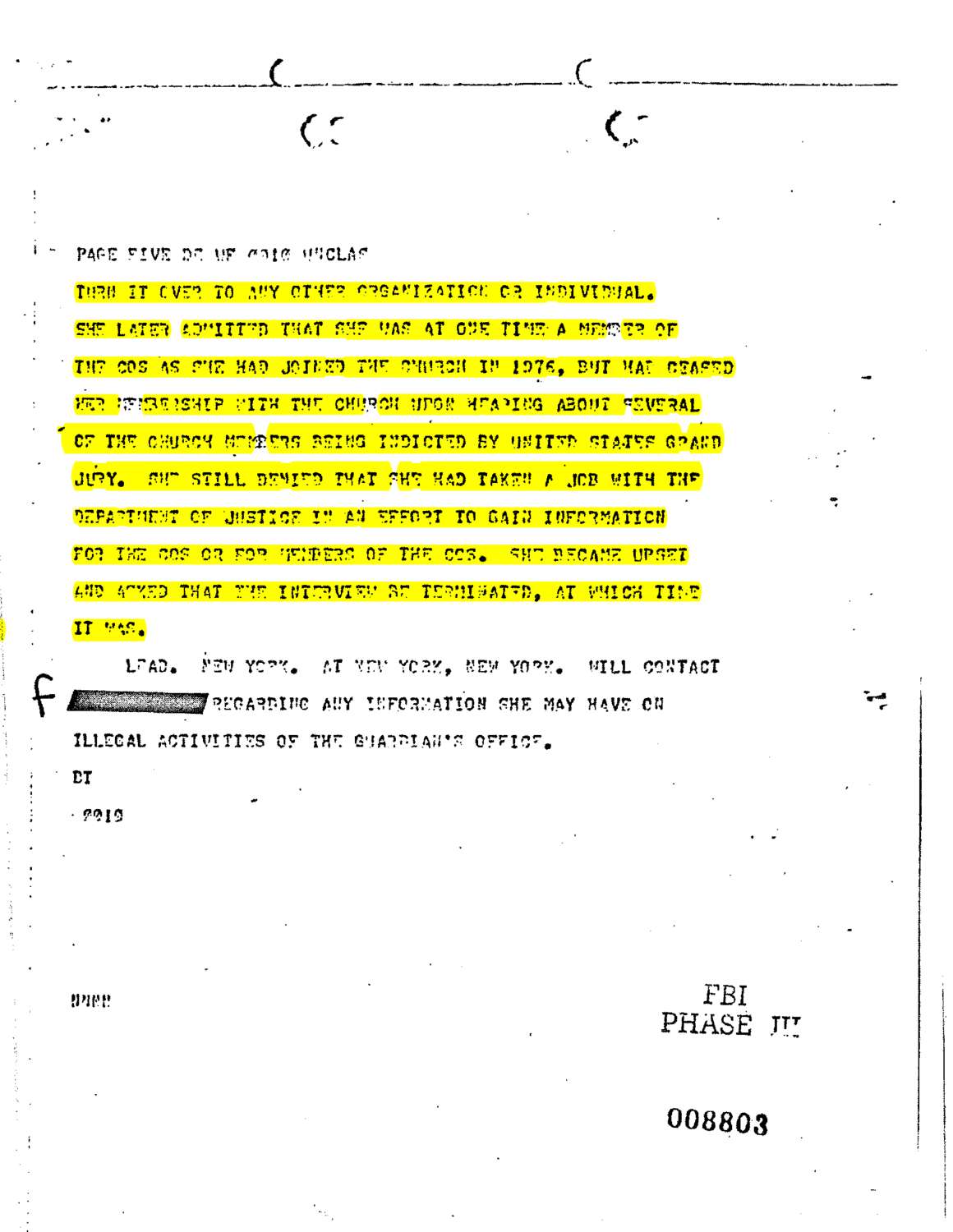